submitted 9 hours ago * by Adhiboy

For a little context:

Back in July a former NeoGAF moderator made the news when it was revealed that he was in possession of child pornography. NeoGAF moderators handled the situation extremely poorly, locking all threads related to the arrest and denying they knew him at a personal level— a false claim. Amir0x had been allowed to break several rules on the site, and most members would agree he was treated with favoritism. NeoGAF admin Tyler Malka denied having known his real name despite having donated $1000 to him (no, I’m not making this up.

That’s not the only time Evilore has made some questionable moves regarding sexual misconduct. [In 2012, he bragged about grabbing a random girl’s ass.

Jumping forward to just a few days ago, a new allegation against Evilore was posted on Facebook. If you read through, you’ll see he’s being accused of some really creepy and pathetic stuff. Over on TheBore, they host a discussion of NeoGAF’s hypocrisy. NeoGAF user Polyh3dron came in and explained how the Facebook post was discovered, basically explaining that the post is real.

“Guess I should chime in since I’m being named.

In a private group convo, one of my fellow participants brought up the fact that EL got #MeToo’d on FB. I saw someone on my feed telling a story an hour prior that could’ve fit but I didn’t read it too closely, was skeptical and posted a shot in our convo… I was then directed toward the comments and lo and behold, there was the name. Was a holy shit moment for me, and something of a letdown too, having met both the accuser and the accused IRL. Posted that shot in our convo as well. Came to the realization that this should only really go public if the accuser wants it to because it’s her story to tell, and the rest of the participants in the convo reached the same consensus, or so it seemed. I deleted the shots from our group chat. Turned out one of the people in there saved the shots, and gave them to another person who then posted it on Voat, and did a godawful job at concealing the identity of the accuser and myself before doing so. She doesn’t deserve to get doxxed and harassed by the internet mob if she’s not ready for it, and it’s solely for that reason that I didn’t want this getting out there, which is why I regret sharing that shot in that group convo.

Polyh3dron was banned from NeoGAF shortly before TheBore post was made without any indication of misbehavior. Note that Polyh3dron may have been linked to the information leaking, so he had a target on his back. Going through his post history, he hadn’t said anything controversial, even by NeoGAF standards.

NeoGAF owner Evilore has been accused of trying to get into the shower with a woman whose film he had been in. His supposed advances were uninvited and he apparently knew she had a boyfriend.

Edit: This post on Voat does a good job explaining the connection between Evilore and the woman

Voat - Have your say

a community platform where you can have your say. No censorship. 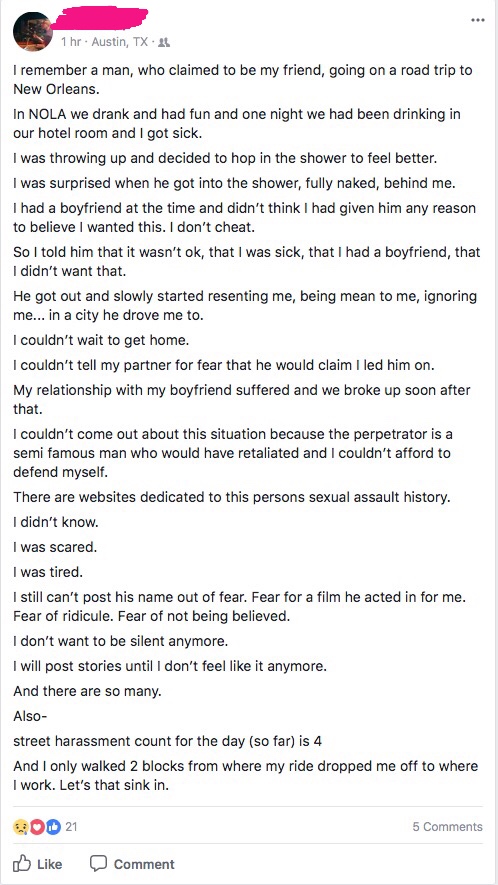 I received so much insane abuse, lies, extrapolations, hundreds of pages of insults without any moderation from this shithole.

@MeowPurrAnn Yes. My girlfriend, my mother, my sister, were all so fucking mad to read the absolute bullshit posted about me there. Complete insanity.
Greywaren 22 Octubre, 2017 21:37 #15