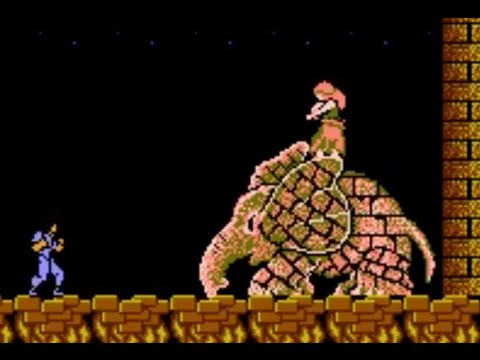 Secret Ties , an unreleased game for the Nintendo Entertainment System, is an English translation of Master Thief Sugar , an equally-unreleased game for the Nintendo Family Computer. The game was developed by Vic Tokai, of Golgo 13 videogame fame, and is based on an early 1970s comic book by Takao Saito, of Golgo 13 comic book fame. I’ve never read Master Thief Sugar , and if my research is any indication, neither has anyone else. So as far as introductions go, this is all I’ve got.

If the game’s plot is any indication, Silk is a professional thief-for-hire with a lust for adventure and a natural magnetism for women. Which is unsurprising, given his dark eyes and Duke Togo chin. After all, what woman wouldn’t flock to a guy with a more than passing resemblance to The Man With The Custom M-16?

We join Silk in what would appear to be an everyday assignment. Vince Brazen, an employee of the World-Con Security Agency, has hired Silk to steal some ancient artifacts from an old Incan temple. “That should show their government just how important a security system is,” he says, with an obviously crooked smile. Over the course of the next six levels, Silk has his girlfriend abducted and held for ransom, is hailed as a great and prophesized Messiah, and kicks boulders into a stone elephant’s face, all while screaming lines like “Another day, another dollar!” and “Feet don’t fail me now!” By the end of the game Silk thwarts the bad guy’s evil plans, rescues the girl, and gives the player a sappy message about the importance of preserving our environment. Roll fake credits, display “The End” in a fancy font, loop music infinitely until the player gets over his paranoia to press a button, just in case it will skip the rest of the ending, then call it a day. And that’s Secret Ties .

The game itself is what I lovingly refer to as a Ninja Gaiden Clone. Silk, represented by a relatively tall and slender sprite, makes his way through each level by running, jumping, kicking, and even performing the signature Ryu Hayabusa wall climb. For the obligatory projectile attack, fallen enemies sometimes drop bullets for his handgun. And once in a great while - which is to say, almost never - Silk can equip a shield, which temporarily makes him immune to all attacks. This is useful for a couple dangerous wall climbs with lasers firing at his back, and not much else.

Each level contains approximately twenty-four screens, according to the easily-accessible debug mode. And by screens I literally mean screens - there is no scrolling in Secret Ties . Walk off! the edge of a screen, and you’re instantly transported to the next. There are about five or six A.I. routines for enemies throughout the game, with the only differences from one level to the next being the enemies’ sprites. Each level contains at least one boss enemy, most of whom can be easily defeated by a swift series of jump-kicks to the face. Add in a couple minor environmental surprises planted here and there, and a wordy talking heads cut-scene after each level, and you’ve more or less got the gist of the game.

It’s easy to say that Secret Ties is a very generic, cookie-cutter game by the standards of 1992. And to an extent, you’d be absolutely correct. But is that a bad thing?

I’m reminded, for some reason, of the Jim Davis business model. You might know Davis as the creator of Garfield. And again, you’d be mostly right, but what you might not realize is that above any other title you might give him, Jim Davis is a businessman. He’s never denied that Garfield was created purely as a marketing icon. He has no pretense of “creating art,” or pushing envelopes, or being the least bit innovative. In fact, he admits that Garfield is the exact opposite. For over twenty-five years now, Garfield has hated Mondays, been too lazy to chase mice, and has coveted more than his fair share of lasagna. “It says to all of us, some things in life can be counted on, they’re consistent,” Davis has been quoted as saying.

Because Garfield has remained relatively low-key, as far as marketing goes, and has not gone through even a hint of change in all these years, there simply has not been opportunity for much of a counterculture backlash. Chris Sullentrop said it best. “What’s kept Garfield in business for so long is Davis’ canny understanding of how much is too much.” He pulled merchandise, calmed down his licensing, and went low-key when it seemed like Garfield was getting too popular. When there was a bit of a lull, he put out a cartoon series, which was entertaining for a while but ultimately forgettable. Hell, just this year, we saw Garfield make his theatrical debut, which was quickly watched and forgotten even before the ink dried on Davis’ royalty checks.

The same could be said of Secret Ties and its ilk. Sure, the released Ninja Gaiden clones - Vice: Project Doom , Shatterhand , Wrath of the Black Manta and what have you - followed the same basic formula. But I’m sure I’m not alone in saying that I happily devoured the games as they came out, and one only need look at a few back issues of Nintendo Power to see games like Time Diver: Eon Man , Bio Force Ape , and Ultimate Journey that, like Secret Ties , were given the axe before the market became terribly saturated with look-alikes. And while there might not be a Jim Davis who retains creative control and ownership over “Ninja Gaiden clones,” it could be said that the real profit is given to us, the gaming nerds who remember the genre fondly and feel a warm sense of security playing a familiar - yet new - game from that era.

Flowery language aside, Secret Ties is worth a look, and a quick play through, but not much else. If you’re at all nostalgic for the games listed above, you’ll feel right at home. Just don’t expect to discover a lost classic. That’s was never Secret Ties’ role.